What you need to know about medications for bipolar disorder, including how to manage your meds and minimize side effects.

The role of medication in bipolar disorder treatment

If you have bipolar disorder, medication will likely be a part of your treatment plan. Medication can bring mania and depression under control and prevent relapse once your mood has stabilized. You may not like the idea of taking bipolar medication long term, especially if you’re struggling with unpleasant side effects. But just as a diabetic needs to take insulin in order to stay healthy, taking medication for bipolar disorder will help you maintain a stable mood.

Since finding the right drug and dose can be tricky, it’s important to work closely with a specialist and re-evaluate your medication regularly. It’s also important to remember that taking medication is just one aspect of a successful treatment program. There are plenty of other steps you can take to manage your symptoms and even reduce the amount of medication required. Healthy lifestyle changes, self-help coping strategies, and exploring therapy are also important in coping with bipolar disorder symptoms and helping you live a full, productive life.

Tips for getting the most out of medication for bipolar disorder

Take advantage of natural mood stabilizers. Your lifestyle can have a huge impact on your symptoms. If you make healthy daily choices, you may be able to reduce the amount of medication you need. Mood stabilizers that don’t require a prescription include keeping a strict sleep schedule, exercising regularly, practicing relaxation techniques, and developing a solid support system.

Add therapy to your treatment plan. Research shows that people who take medication for bipolar disorder tend to recover much faster and control their moods better if they also get therapy. Therapy gives you the tools to cope with life’s difficulties, monitor your progress, and deal with the problems bipolar disorder is causing in your personal and professional life.

Continue taking medication, even after you feel better. The likelihood of having a relapse is very high if you stop taking your bipolar medication. Suddenly stopping medication is especially dangerous. Talk to your doctor before you make any changes, even if you believe you no longer need medication. Your doctor can help you make any adjustments safely.

It can take a while to find the right bipolar medication and dose. Everyone responds to medication differently, so you may have to try several bipolar disorder drugs before you find the one that works for you. Be patient, but don’t settle for a bipolar medication that makes you feel lousy, either.

Once you’ve discovered the right bipolar disorder drug or drug cocktail, it may still take time to determine the optimal dose. In the case of mood stabilizing medications such as lithium, the difference between a beneficial dose and a toxic one is small. Frequent office visits to re-evaluate your medication needs and careful monitoring of symptoms and side effects will help you stay safe.

Learn about your bipolar disorder medication

When starting a new medication, educate yourself about how to take it safely. Questions to ask your doctor about any new prescription include:

How often should you talk with your doctor?

During an acute manic or depressive episode, you’ll likely need to talk with your doctor at least once a week to monitor your symptoms, medications, and any side effects you’re experiencing. This will become less often as you start to recover. Once you’re feeling better, you’ll likely still need to review things with your doctor every few months. However, it’s important to see your doctor right away if you experience any of the following: 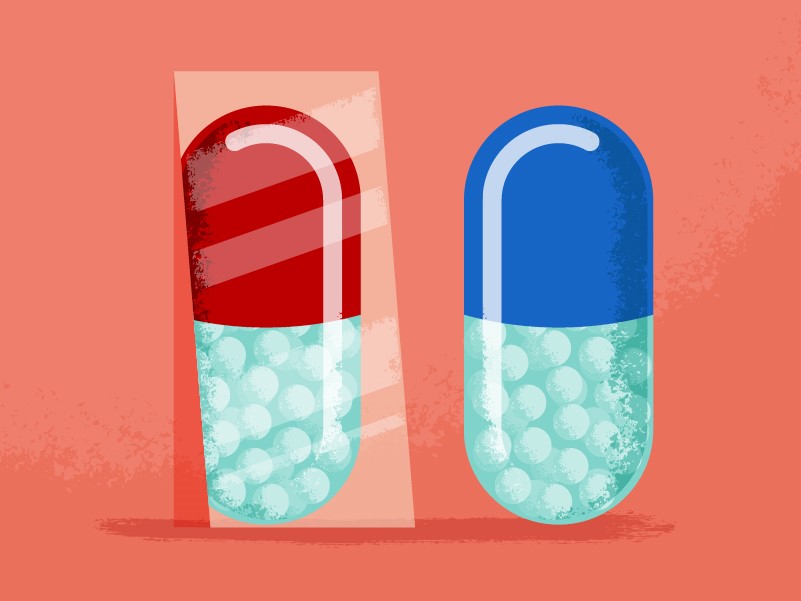 Generic drugs have the same use, dosage, side effects, risks, safety profile, and potency as the original brand-name drug. The main reason why generic drugs are cheaper than brand-name drugs is that the generic drug manufacturer does not need to recoup huge expenses for developing and marketing a drug. Once the patent for the original drug has expired, other manufacturers can produce the same drug with the same ingredients at a markedly lower cost.

Occasionally, brand-name drugs have different coatings or color dyes to change their appearance. In rare cases, these extra ingredients will make the generic form of the drug less tolerable, so if your condition worsens after switching from a brand-name to a generic drug, consult your doctor. In most cases, however, generic drugs are just as safe and effective as brand-name drugs, and a lot easier on your wallet.

All prescription drugs come with risks, but if you take your bipolar disorder medications responsibly and combine them with therapy and healthy lifestyle choices, you can minimize the risks and maximize your chances of treatment success.

Keep track of side effects. Using a log, keep a record of any side effects you experience, when they occur, and how bad they are. Bring the log to your doctor, who may have suggestions for minimizing the side effects, decide to switch you to another drug or change your bipolar medication dose.

Be aware of potential drug interactions. You should always check for drug interactions before taking another prescription medication, over-the-counter drug, or herbal supplement. Drug interactions can cause unexpected side effects or make your bipolar disorder medication less effective or even dangerous. Mixing certain foods and beverages with your bipolar medication can also cause problems. As well as being a depressant, alcohol can also interfere with how your medication works. Talk to your doctor or pharmacist and read drug labels carefully.

Mood stabilizers are medications that help control the highs and lows of bipolar disorder. They are the cornerstone of treatment, both for mania and depression. Lithium is the oldest and most well-known mood stabilizer and is highly effective for treating mania. Lithium can also help bipolar depression. However, it is not as effective for mixed episodes or rapid cycling forms of bipolar disorder. Lithium takes from one to two weeks to reach its full effect.

Common side effects of lithium

Some of these common side effects may go away as your body adapts to the medication.

The importance of regular blood tests

If you take lithium, it’s important to have regular blood tests to make sure your dose is in the effective range. Doses that are too high can be toxic. When you first start taking it, your doctor may check your blood levels once or twice a week. When the right dose has been determined and your levels are steady, it’s still important to get blood tests every two to three months, since many things can cause your lithium levels to change. Even taking a different brand of lithium can lead to different blood levels.

Other factors that influence your lithium levels

How to avoid toxic lithium levels from developing

Go for blood tests as required.

Keep a steady salt intake. Do not suddenly reduce the amount of salt in your diet.

Drink plenty of fluids (8 to 10 glasses of water every day), more in hot weather or if you exercise heavily.

Avoid alcohol, which make you dehydrated.

Always tell any doctor or pharmacist that you are on lithium before taking any new medicines.

Originally developed for the treatment of epilepsy, anticonvulsants have been shown to relieve the symptoms of mania and reduce mood swings.

Valproic acid, also known as divalproex or valproate, is a highly effective mood stabilizer. Common brand names include Depakote and Depakene. Valproic acid is often the first choice for rapid cycling, mixed mania, or mania with hallucinations or delusions. It is a good bipolar medication option if you can’t tolerate the side effects of lithium.

Common side effects include:

Other anticonvulsant medications for bipolar disorder

Although antidepressants have traditionally been used to treat episodes of bipolar depression, their use is becoming more and more controversial. A growing body of research calls their safety and efficacy into question.

Antidepressants should be used with caution

Antidepressants can increase mood cycling. Many experts believe that over time, antidepressant use in people with bipolar disorder has a mood destabilizing effect, increasing the frequency of manic and depressive episodes.

The new focus in bipolar depression treatment is on optimizing the dose of mood stabilizers. If you can stop your mood cycling, you might stop having depressive episodes entirely. If you are able to stop the mood cycling, but symptoms of depression remain, the following medications may help:

What should I do if I’m currently taking an antidepressant?

First, and most importantly, don’t panic! DO NOT stop taking your antidepressant suddenly, as this can be dangerous. Talk to your doctor about slowly tapering off the antidepressant. The tapering process should be done very slowly, usually over the course of several months, in order to reduce adverse withdrawal effects.

Common side effects of antipsychotic medications for bipolar disorder

Other medications for bipolar disorder

Other medications your doctor may recommend include benzodiazepines, calcium channel blockers, and thyroid medications.

Mood stabilizers can take up to several weeks to reach their full effect. While you’re waiting for the medication to kick in, your doctor may prescribe a benzodiazepine to relieve any symptoms of anxiety, agitation, or insomnia. Benzodiazepines are fast-acting sedatives that work within 30 minutes to an hour. Because of their high addictive potential, however, benzodiazepines should only be used until your mood stabilizer or antidepressant begins to work. Those with a history of substance abuse should be particularly cautious.

Traditionally used to treat heart problems and high blood pressure, they also have a mood stabilizing effect. They have fewer side effects than traditional mood stabilizers, but they are also less effective. However, they may be an option for people who can’t tolerate lithium or anticonvulsants.

People with bipolar disorder often have abnormal levels of thyroid hormone, especially rapid cyclers. Lithium treatment can also cause low thyroid levels. In these cases, thyroid medication may be added to the drug treatment regimen. While research is still ongoing, thyroid medication also shows promise as a treatment for bipolar depression with minimal side effects.

Bipolar medication is most effective when used in combination with other bipolar disorder treatments, including:

Therapy. People who take medication for bipolar disorder tend to recover much faster and control their moods much better if they also get therapy. Therapy gives you the tools to cope with life’s difficulties, monitor your progress, and deal with the problems bipolar disorder is causing in your personal and professional life.

Exercise. Getting regular exercise can reduce bipolar disorder symptoms and help stabilize mood swings. Exercise is also a safe and effective way to release the pent-up energy associated with the manic episodes of bipolar disorder.

Stable sleep schedule. Studies have found that insufficient sleep can precipitate manic episodes in bipolar patients. To keep symptoms and mood episodes to a minimum maintain a stable sleep schedule. It is also important to regulate darkness and light exposure as these throw off sleep-wake cycles and upset the sensitive biological clock in people with bipolar disorder.

Healthy diet. Omega-3 fatty acids may lessen the symptoms of bipolar disorder. Weight gain is a common side effect of many bipolar medications, so it’s important to adopt healthy eating habits to manage your weight. Avoid caffeine, alcohol, and drugs as they can adversely interact with bipolar medications.

Social support network. Living with bipolar disorder can be challenging, and having a solid support system in place can make all the difference in your outlook and motivation. Participating in a bipolar disorder support group can give you the opportunity to share your experiences and learn from others. Support from loved ones also makes a huge difference, so reach out to your family and friends. They care about you and want to help.